Get email alerts for The Persuasions
7 ratings
Available: Usually ships in 2-5 business days
Add to Cart
Add to Wishlist
Format:  CD
item number:  COL 6721
Related products:
The Persuasions: Sunday Morning Soul for $10.90
The Persuasions: More Than Before / I Just Want To Sing With My Friends for $14.80
The Persuasions: Acappella for $16.30
Our customers love us! 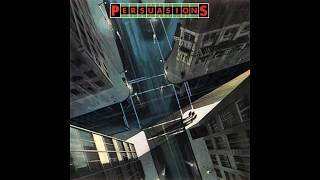 When do four voices sound like fourteen? That's what happens when The Persuasions start "Chirpin'." Originally released in 1977, their ninth album charges out of the gate with a galloping version of The Rivingtons' "Papa Oom Mow Mow" that exceeds even the original in its energy and punch. Other highlights include a super-fine rendition of Kenny Vance's "Looking For an Echo." Ten tracks of acappella artistry from true masters of the form.

The Persuasions: Jerry Lawson, Joseph Russell, Jimmy Hayes and Herbert Tubo Rhoad (vocals).
The Persuasions: Joseph Russell, Jerry Lawson, Jimmy Hayes, Herbert Tubo Rhoad.
Some fans consider this the Persuasions' best album, which may or may not be the case, but there's no doubt that it's among their most varied and ambitious. The centerpiece (and one of the group's few self-penned songs) is "Women and Drinkin'" a cautionary epic (nearly seven minutes long) about fast living, based around a riff from Parliament's "I Just Want to Testify." Other highlights include a great version of Tony Joe White's "Willie and Laura Mae Jones" (neatly reversing the original's sexual and racial politics), a beautiful take on the doo-wop revival classic "Looking for an Echo,' and a hilarious run through of the Rivingtons' novelty rocker "Papa Oom Mow Mow."

77%off
The Persuasions
On the Good Ship Lollipop (CD)
$3.74 ENDS TONIGHT
Add to Cart

The Persuasions
A Cappella Dreams (CD)
$17.20
Add to Cart

20%off
The Persuasions
Acappella
$11.98 ENDS TONIGHT
Add to Cart

The Persuasions
More Than Before / I Just Want To Sing With My Friends
$14.80
Add to Cart

The Persuasions
Acappella
$16.30
Add to Cart