Biopic of Oliver Wendell Holmes and his loving wife, based on the hit Broadway play. 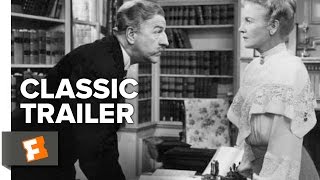 When 61-year-old Oliver Wendell Holmes Jr. arrives in Washington DC in 1902 to take his seat on the Supreme Court, he worries that he may be to old to achieve much. But his wife Fanny will hear no such nonsense: "It's never too late for those who love a good fight, for those who keep on looking ahead!" Fanny is right. Holmes will remain on the Court for 30 years, helping bring about momentous changes in the law of free speech, labor relations and other vital issues. But one thing would never change - the bedrock devotion Holmes and Fanny shared. Louis Calhern reprises his famed Broadway role (earning a 1950 Best Actor Oscar? nomination) as the Great Dissenter in this moving, lively and often humorous biography of The Magnificent Yankee.

Starring Louis Calhern as the groundbreaking legal giant Oliver Wendell Holmes, THE MAGNIFICENT YANKEE is perhaps the most far afield from his normal metier of any film that John Sturges worked on. Nonetheless, he acquits himself well in a biopic that mainly concentrates on Holmes's peaceful domestic life. Arriving in Washington as a Supreme Court appointee in 1902, Holmes goes on to establish himself in the next 30 years as he Great Dissenter--"the most illustrious figure in the history of American law," according to Judge Richard Posner. Holmes and his wife, Fanny, have no children but enjoy a happy marriage, and he takes a paternal interest in the 35 law clerks who work for him during the period, a list that includes many familiar names, from Louis Brandeis to Alger Hiss. Well-known friends of the judge's such as novelist Owen Wister (THE VIRGINIAN) and historian Henry Adams (MONT ST. MICHEL ET CHARTRES) also make an appearance. When he turns 80, the justice's clerks all return to celebrate his birthday. A literate, if sentimental, tribute, its depiction of the jurist as a kindly old man leaves the source of his eminence something of a mystery. However, it features a finely modulated perfomance by Calhern in the title role.

Theatrical Release
This product is made-on-demand by the manufacturer using DVD-R recordable media. Almost all DVD players can play DVD-Rs (except for some older models made before 2000) - please consult your owner's manual for formats compatible with your player. These DVD-Rs may not play on all computers or DVD player/recorders. To address this, the manufacturer recommends viewing this product on a DVD player that does not have recording capability.