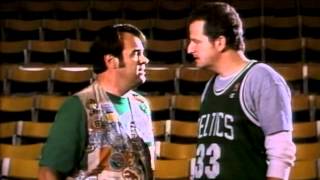 "This has nothing to do with racism.... If the Red Sox were in a pennant race with the Orioles, we'd kidnap Cal Ripken and he's as white as they come."
- Mike O'Hara (DANIEL STERN) to Lewis Scott (DAMON WAYANS), who has accused Mike of being a racist for kidnapping him.

A pair of die-hard Boston Celtics fans accidentally-on-purpose kidnap the star of the rival Utah Jazz the night before Game 7 of the NBA championship series in this madcap comedy. Having intended simply to get him too drunk to play the next day, the loudmouth simpletons wake up with a bound, gagged--and angry--hoopster in their apartment. He shoots, he scores!

There's good news and bad news for blue-collar Bostonians Mike and Jimmy. The good news is, their beloved Boston Celtics are in the NBA Finals. The bad news is, the Celts are playing the Utah Jazz -- and their egotistical superstar player, Lewis Scott.
On the eve of the climactic seventh game, Mike and Jimmy meet Lewis at a nightclub. One thing leads to another, and while drunk, the two Celtic fans kidnap Lewis. The next morning, the pair awaken to find Lewis bound and gagged in their apartment. They quickly realize what they've done -- but are also aware that the Utah Jazz will probably lose without Lewis. Will Mike and Jimmy keep Lewis hostage in a desperate attempt to help their team win' Or will they let Lewis go... and watch a Celtic victory go down the drain'