Story of a social-climbing woman who marries a wealthy-but-homespun man and forces her way into high society. 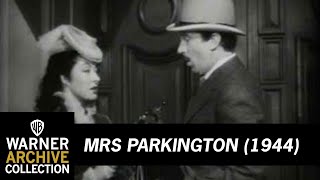 One day in 1872, Susie Graham is making beds at her mother's Leaping Rock, Nevada, boarding house. The next day, she's a millionaire's wife. That millionaire is Major Augustus Parkington, a dashing financial buccaneer who sweeps Susie away to a 5th Avenue mansion and a life of privilege and power.

Greer Garson and Walter Pidgeon mark the fourth of their eight beloved film pairings with this grand chronicle (featuring sharp Oscar?-nominated* performances from Garson and Agnes Moorehead) that begins with Susie as the 84-year-old family matriarch and flashes back to decades of passion, breakups, reconciliations, losses, laughs, schemes and sacrifices. Epic romance, epic adventure: Mrs. Parkington invites you to share her remarkable life.

Family Interaction | Betrayal | Personal Triumph | Rags To Riches
This product is made-on-demand by the manufacturer using DVD-R recordable media. Almost all DVD players can play DVD-Rs (except for some older models made before 2000) - please consult your owner's manual for formats compatible with your player. These DVD-Rs may not play on all computers or DVD player/recorders. To address this, the manufacturer recommends viewing this product on a DVD player that does not have recording capability.