After his wife dies in childbirth en route to California in 1870, Joel McCrea settles down in Oklahoma. He quickly finds trouble when he tries to protect an Indian woman caring for his baby. 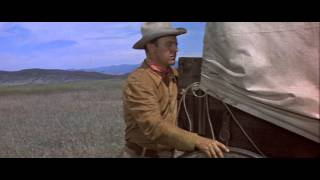 After his wife dies in childbirth en route to California in 1870, Joel McCrea ("Sullivan's Travels," "Buffalo Bill") settles down in Oklahoma. He quickly finds trouble when he tries to protect an Indian woman caring for his baby from the two villains who are attempting to cheat her father out of his oil-rich land. With Emmy-winner Barbara Hale ("Perry Mason") and Brad Dexter ("The Magnificent Seven").

A frontier doctor confronts injustice, greed and prejudice in this western drama set in 1870's Oklahoma.

Doctor John Brighton decides to set up his practice in a frontier community in Oklahoma. When he treats an Indian whose oil-rich land is coveted by corrupt ranchers, he finds himself caught in a battle between the settlers and the Native Americans that is growing ever more dangerous.

Rachel and the Stranger
$18 on Sale
Add to Cart

No Name on the Bullet
$8.70 Super Savings
Add to Cart