Three WWI soldiers, upon returning home from battle, open up an auto-repair shop. 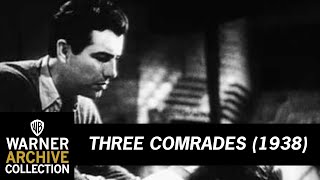 World War I is over, let the living begin. So three German soldiers open a repair ship and get on with their lives. Erich (Robert Taylor) finds unexpected love with frail Patricia (Margaret Sullavan), Gottfried (Robert Young) falls in with a verboten anti-nationalist group, Otto (Franchot Tone) approaches each day with worldly cynicism. And through all that's to come, the men know they will remain Three Comrades.

Three German Army veterans set up a business in postwar Berlin. Surrounded by poverty, they feel their lives to be meaningless until they meet a high-spirited, impoverished Englishwoman who endows them with her own transcendence. Based on the novel by Erich Maria Remarque. Academy Award Nominations: Best Actress--Margaret Sullavan.

Buddies | World War I | Tragedy | Recommended | Poverty
This product is made-on-demand by the manufacturer using DVD-R recordable media. Almost all DVD players can play DVD-Rs (except for some older models made before 2000) - please consult your owner's manual for formats compatible with your player. These DVD-Rs may not play on all computers or DVD player/recorders. To address this, the manufacturer recommends viewing this product on a DVD player that does not have recording capability.

26%off
The Underworld Story
$9.60 Spring Sale
Add to Cart

The Good Fairy
$19
Add to Cart