A female novelist doesn't realize her new friend is the wife whose husband she's trying to steal. 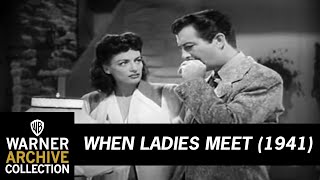 What happens When Ladies Meet? If the ladies are Best Actress Academy Award® winners* Joan Crawford and Greer Garson, expect classic entertainment. Glamorously gowned, exquisitely coiffed, the two screen legends share a heart-to-heart on sex, men, fidelity and wedlock in a sophisticated comedy/drama set among the well-to-do and the done-to. Crawford plays Mary, a novelist whose latest work extols the virtues of extramarital amour. Her inspiration may be personal: she's having a fling with her married publisher. Then Mary meets and instantly bonds with charming Clare (Garson), who's married to a publisher. Yes, that publisher. And suddenly a mad passion with another woman's husband doesn't seem quite so virtuous.

When two women get together to discuss the characters of a new book one of them is writing, they are unaware that they both love the same man... just like the characters in the novel. This 1941 remake of a 1933 film with the same name stars Joan Crawford and Greer Garson as the ladies in the love triangle, both smitten with Herbert Marshall, in a dashing turn. The exquisite production values earned the film an Academy Award nomination for Best Interior Decoration.

A successful novelist spurns the love of a young journalist because she desires her married publisher, whose wife is not at all ready to relinquish her husband.

Romance | Vintage | Betrayal
This product is made-on-demand by the manufacturer using DVD-R recordable media. Almost all DVD players can play DVD-Rs (except for some older models made before 2000) - please consult your owner's manual for formats compatible with your player. These DVD-Rs may not play on all computers or DVD player/recorders. To address this, the manufacturer recommends viewing this product on a DVD player that does not have recording capability.