A daffy socialite gets her friends mixed up in a murder investigation. 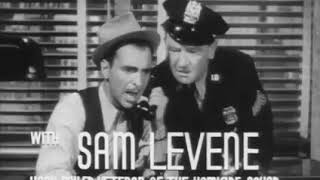 Dizzy heiress Melsa Manton and her manicured band of Park Avenue pranksters think Manhattan is an amusement park built just for them. So when Melsa stumbles across a murder victim, the pranksters decide to play detective. The only trouble is that the murderer is playing too - for keeps.

Wealthy socialite Melsa Manton (Barbara Stanwyck) is taking her pooches for a walk in the dead of the night when she stumbles upon a dead body and a car fleeing the scene of the crime. She alerts the police but the corpse has disappeared by the time they arrive, and the lieutenant, knowing of her madcap reputation, believes she was playing a practical joke. After newspaper editor Peter Ames (Henry Fonda) takes her to task in print, she sues him for libel and enlists the aid of her society friends in tracking down the body and finding the killer. Eventually, Ames comes around to believing Melsa's story and aids her in her search. It isn't long before the two antagonists find they're attracted to each other -- but they have to catch the murderer before they can settle down and live happily ever after. Fonda and Stanwyck would team up again in YOU BELONG TO ME and THE LADY EVE.

Mystery | Romance | Thriller | Detective | Crime | Romances | Killers | Couples
This product is made-on-demand by the manufacturer using DVD-R recordable media. Almost all DVD players can play DVD-Rs (except for some older models made before 2000) - please consult your owner's manual for formats compatible with your player. These DVD-Rs may not play on all computers or DVD player/recorders. To address this, the manufacturer recommends viewing this product on a DVD player that does not have recording capability.

His Girl Friday
$10
Add to Cart