Entertainment Weekly: "...Flashes of beauty and menace, often in one song..." - Rating: A 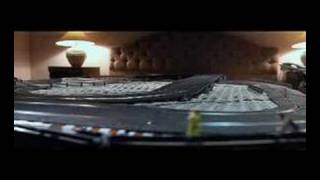 This is an Enhanced audio CD, which contains regular audio tracks and multimedia computer files.
Idlewild: Roddy Woomble (vocals); Rod Jones (guitar); Bob Fairfoull (bass); Colin Newton (drums).
Engineers include: Dave Eringa.
Recorded at Air Studios, London & Jacob's Studio, Surrey, England; Rockfield Studios, Monmouth, Wales; Electrical Audio, Chicago, Illinois.
Four Scots who first made name in their native U.K. in the late '90s with their punk-laden debut, Hope Is Important, scale back a bit on their sophomore effort, 100 Broken Windows. Idlewild have grown up and mold traditional song structure with classic Victorian lyrical imagery. They aren't shy about playing into their influences either. When it's supposed to be fashionable to enjoy artists such as Westlife and Atomic Kitten, Idlewild still hark at what it's like to grow up in the working class. It's neither glossy nor spectacular. It's rough-edged in spots but also tightly woven. 100 Broken Windows illustrates what these four men love about music, specifically their passion for Nirvana and R.E.M. Frontman Roddy Woomble is lyrically quick-witted, and his hazy, splintering vocals ache on tracks such as "Little Discourage" and "I Don't Have the Map." Melodies are muddled, but these tracks exude the similar pain and desire found in late-'80s/early-'90s punk rock. Idlewild were just kids then but were obviously affected by the sounds of Sonic Youth, the Pixies, and Fugazi. "Roseability" (a nice tribute to poet Gertrude Stein) and "Actually It's Darkness" infinitely find a calmer Idlewild, and such three-chord tracks are tightly polished with energy not present in most modern rock artists currently spawning fast-paced rap-rock. Idlewild's spunk is raw, a nice maturation from the early days of angst-ridden anthems made for no one who was listening. 100 Broken Windows moves past such exertion and identifies life's transition into being an adult. Roddy Woomble likes to keep that hidden, however. ~ MacKenzie Wilson

77%off
Idlewild
Make Another World
$3.74 BLACK FRIDAY
Add to Cart

Idlewild
Everything Ever Written [import]
$27.30
Add to Cart