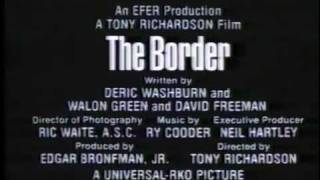 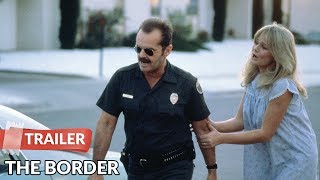 Possibly the closest that Jack Nicholson has ever come to playing an old-fashioned hero was the role of Charlie Smith, in a film whose writers had worked on THE WILD BUNCH and THE DEER HUNTER. A U.S. border patrol guard who's disenchanted with his work, Charlie accedes to his wife, Marcy's (Valerie Perrine), wishes to move to El Paso so they can enjoy a higher standard of living and stay in a duplex near her friend Savannah (Shannon Wilcox), and her husband, Cat (Harvey Keitel), who also works for the border patrol. But after relocating, Charlie is so appalled by the level of corruption and bribery of the area's guards, which includes running illegal aliens across the border to work as farmhands and which is run by Cat, that he initially opts not to become involved. He realizes he has to go on the take, however, when Marcy, an eager consumer, racks up some serious debts while decorating their new apartment. Charlie takes an interest in Maria (Elpidia Carrillo), an illegal who has returned the hubcaps her brother stole from him, regarding her as an emblem of the purity long absent from his own life. When her baby is kidnapped and sold to Cat for resale to adoptive parents, Charlie decides to act. Jack shelves his usual mannerisms to give one of the most powerful and underrated performances of his career, in an effective, low-key melodrama about a situation that hasn't changed a whit in the decades since the film was made.

Los Angeles border guard Charlie Smith and his wife move to El Paso in hopes of a finding a higher standard of living. They quickly run up a huge debt on swimming pools and patio furniture, and the overwhelmed Charlie finds himself tempted to take bribes from the Mexican kingpins who smuggle illegal aliens across the border.

Bring Me the Head of Alfredo Garcia
$17.20 Super Savings
Add to Cart

The Three Burials of Melquiades Estrada (Blu-ray)
$23.50
Add to Cart