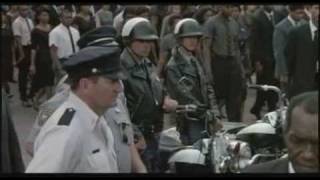 In 1964, when three civil-rights workers, two white and one black, mysteriously disappear while driving through Mississippi, two FBI agents, Ward (Willem Dafoe) and Anderson (Gene Hackman), are sent in to investigate. While Ward is young and by the book, Anderson is a seasoned southerner comfortable with the Byzantine (and, to Ward, morally ambiguous) ways of his region. Together they sift through a variety of leads and come up empty-handed--until the town sheriff's wife (Frances McDormand) steps forward and reveals some surprising information. In order to solve the case, the two contrasting agents must not only overcome the hostility of the local authorities and the black community but contend with their own differences as well.

A fictionalized account of one of the landmarks in the civil-rights movement, MISSISSIPPI BURNING is a swift and powerful film. Director Alan Parker, continuing his investigation of human cruelty (begun explosively in his harrowing 1978 film MIDNIGHT EXPRESS), crafts a historically poignant film that fingers the monstrosities of a virulent strain of racial intolerance in America. Dafoe and Hackman are convincing as they investigate the disappearance of the civil-rights workers and unravel the grisly web of obfuscation around a scandalous, cancerous truth very near the heart of a nation.

In 1964, two FBI agents try to solve the mystery of the disappearance of three civil rights workers.

Murder in Mississippi
$16.20
Add to Cart

19%off
Ghosts of Mississippi
$12.10 Super Savings
Add to Cart