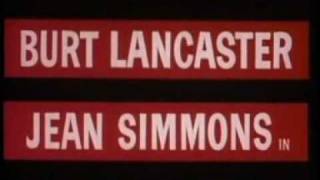 Elmer Gantry is a charming, fast-talking con, working the road as a traveling salesman in the 1920s. Burt Lancaster stars as the elusive Gantry in this charismatic adaptation of Sinclair Lewis's 1927 novel. When Gantry runs across a group of traveling evangelists, he charms their saintly leader, Sister Susan Falconer (Jean Simmons), and becomes her partner, preaching fire and brimstone in the packed revival tents of the hardened Midwest. Gantry's robust style and Falconer's Joan of Arc-like spirit skyrocket the two minstrels to fame and fortune as they travel with their flock waging war on sinners and speakeasies--until they preach in a big city and catch the eye of a tough prostitute (Shirley Jones) who knows that Elmer is not quite as holy as he appears. This biting portrait of the business of religion was highly innovative at the time of its release, casting a slightly tarnished light on the hustle and theatrics of traveling ministries, while analyzing the true nature of faith and redemption. Lancaster's performance as the salesman turned preacher is dynamic and highly charismatic, full of energy and robust flair.

Burt Lancaster stars as Elmer Gantry, a streetwise, fast-talking traveling salesman working the road in the 1920s in this adaptation of Sinclair Lewis's 1927 novel. Always on the lookout for the next moneymaking scheme, Elmer attracts the attention of a group of traveling evangelists, charming their leader, the saintly Sister Susan Falconer. Elmer becomes her smooth-talking preaching sidekick, plagiarizing speeches to promote himself above all else as he successfully exploits the folks of America's Corn Belt. The film features charismatic performances by Lancaster in the title role and Shirley Jones as a tough prostitute.