A tear duct opening tale about radio singer Joe Lane, who takes a swing at the slimeball who made a pass at his wife - and accidentally kills him. Imprisoned, Joe belts out tunes from behind bars and dreams of his wife and son. 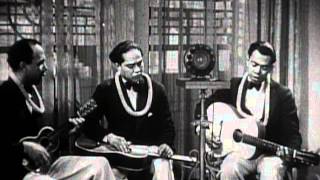 Say it with Songs - Trailer (Clip)

The movie is titled Say It with Songs, but the Warner brothers said it with cash, paying star Al Jolson a then-whopping $500,000 in hopes of luring his many fans to the picture palaces. The result is a tear duct-opening tale about radio singer Joe Lane, who takes a swing at the slimeball who made a pass at his wife - and accidentally kills him. Imprisoned, Joe belts out tunes from behind bars and dreams of his wife and son (Davey Lee, who climbed upon Jolson's knee in The Singing Fool). Joe finally gets out... but more heartache awaits. The De Sylva-Brown-Henderson songwriting team that crafted Sonny Boy for The Singing Fool provides here another sentimental salute to paternal devotion, Little Pal.

On the strength of his previous hits THE JAZZ SINGER (1927) and THE SINGING FOOL (1928), Al Jolson was Hollywood's hottest star in 1929. Jolson's cinematic offering for that year was SAY IT WITH SONGS, a characteristic blend of music, comedy and treacly sentiment. The star is cast as Joe Lane, a radio star who hits it big then begins neglecting his wife Katherine (Marian Nixon) and his dewy-eyed son "Little Pal" (Davey Lee, Jolson's co-star in SINGING FOOL) in favor of the gaming tables. Joe is brought down to earth when his manager and "best friend" begins putting the moves on Katherine. Accidentally killing the manager in a fight, Joe heads off to prison, extracting a promise from Katherine that she will wait for him. During his incarceration, however, Katherine makes the acquaintance of a handsome surgeon (John Bowers), and it looks as if their friendship will blossom into love. When "Little Pal" is struck by a car on the same day that Joe is paroled, the young surgeon saves the kid's life, thereby bringing Joe and Katherine back together again. A few amusing opening bits aside (most of them Jewish-dialect jokes, a Jolson specialty), SAY IT WITH SONGS is awash with bathos, making the film quite a chore to sit through today. It cannot be denied, however, that Al Jolson is a dynamic presence, especially when belting out such standards as "Back In Your Own Backyard" and "Little Pal". Long unavailable for reappraisal, SAY IT WITH SONGS was reissued on laserdisc in the late 1980s through the Herculean efforts of the Al Jolson Society.

Death | Prison / Prisoners | Silent
This product is made-on-demand by the manufacturer using DVD-R recordable media. Almost all DVD players can play DVD-Rs (except for some older models made before 2000) - please consult your owner's manual for formats compatible with your player. These DVD-Rs may not play on all computers or DVD player/recorders. To address this, the manufacturer recommends viewing this product on a DVD player that does not have recording capability.