Don't Be Afraid of the Dark
Warner Archive Collection (series) 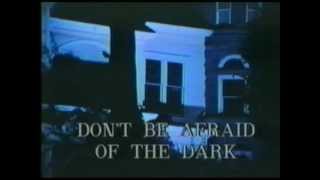 Don't Be Afraid Of The Dark Trailer (1973-USA version)

An old house... a mysterious locked room... a terrifying secret. Elements that make a horror movie memorably chilling get a taut, spooky reworking in Don't Be Afraid of the Dark. Kim Darby and Jim Hutton star as Sally and Alex, young marrieds who inherit a crumbling mansion. Despite warnings to leave well enough alone in her new home, Sally unlocks the mysterious room, opens a bricked-up fireplace - and unleashes a horde of hideous, whispering, murdering mini-demons only she can see and hear. Alex thinks she's imagining things. We know she isn't. And we know Sally should be very, very afraid of the dark!

A young couple inherit a house possessed by evil little creatures. Made for television.

Monsters | Supernatural | Made-For-Network TV | Haunted Houses | Demons | Witches
This product is made-on-demand by the manufacturer using DVD-R recordable media. Almost all DVD players can play DVD-Rs (except for some older models made before 2000) - please consult your owner's manual for formats compatible with your player. These DVD-Rs may not play on all computers or DVD player/recorders. To address this, the manufacturer recommends viewing this product on a DVD player that does not have recording capability.

16%off
Dark Night of the Scarecrow
$12.50 Super Savings
Add to Cart

Customer Rating:
Based on 4460 ratings.


This movie is one that I have not seen in ages! I was actually trying to remember the title, when looking through Oldies.com, I actually found it. The order came sooner than expected, and was of great quality. Can not wait to see it again.