Computer scientist Harry Benson (George Segal) has experimental brain surgery to end his potentially dangerous seizures. But there's no escaping his own mind. The experiment has backfired and the seizures return...with a terminal vengeance. 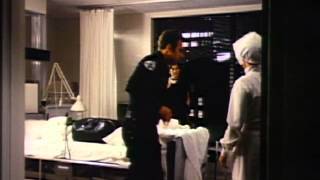 Mind Control. Advances of modern science have removed it from the realm of the mystical into the all-too-probable. What happens when science loses control is the subject of The Terminal Man, based on a novel by Michael Crichton (Jurassic Park, The Andromeda Strain) and written for the screen and directed by Mike Hodges (Get Carter, Croupier).

Computer scientist Harry Benson (George Segal) has experimental brain surgery to end his potentially dangerous seizures. Electrodes are attached to 40 terminals of his brain to counteract his violent impulses. But there's no escaping his own mind. The experiment has backfired and the seizures return... with a terminal vengeance. Hooking into this visionary tale will unnerve you. But the truth behind its hallucinatory horrors will fascinate and stimulate you."

A computer scientist has an electrode implanted in his brain to control his violent impulses. But when something goes awry he goes on a killing spree in the streets of Los Angeles. From a novel by "Jurassic Park" author, Michael Crichton.

Futuristic | Science-Fiction | Suspense | Thriller | Theatrical Release
This product is made-on-demand by the manufacturer using DVD-R recordable media. Almost all DVD players can play DVD-Rs (except for some older models made before 2000) - please consult your owner's manual for formats compatible with your player. These DVD-Rs may not play on all computers or DVD player/recorders. To address this, the manufacturer recommends viewing this product on a DVD player that does not have recording capability.