They love to fight... but not at night! 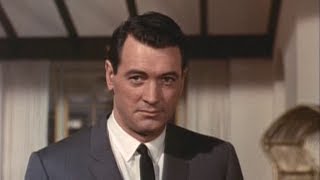 An American businessman on assignment in London meets and marries an Italian woman his first day in town. Discovering they don't have anything in common other than in the bedroom he returns to the states. Seven years later he goes back to London to get a divorce, but in hopes of securing a promotion he courts her again--and this time they fall in love.

Some people will do anything to reach the top rung of the corporate ladder -- even get back together with an estranged
spouse.
Carter is a sullen petroleum businessman living in England. He wants to be a real company leader. But his rocky seven-year marriage has left a blemish on his resume. So a PR flak named Bramwell sets out to orchestrate Carter's rise.
Bramwell must convince Toni, Carter's brassy wife, to rekindle a chilly romance with her spouse for image's sake. Toni, though, is her erstwhile husband's total opposite, for she has since dedicated her life to political causes.
As Bramwell discovers, this is no easy task.

That Touch of Mink
$17.90 Super Savings
Add to Cart

Do Not Disturb
$18.10 Super Savings
Add to Cart

Send Me No Flowers (DVD)
$13 Super Savings
Add to Cart