Oscar-honoree Edward G. Robinson stars in this true story of the German scientist who devoted his life to curing syphilis. 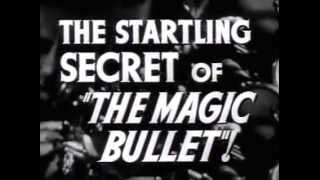 Paul Ehrlich isn't the hero type. Yet, using intellect and compassion as weapons, Ehrlich is the greatest of heroes - one who conquers disease and prejudice and save tens of thousands of lives.

Tuberculosis. Diphtheria. Syphilis. Ehrlich's work led to medical breakthroughs in each. But other foes blocked his battle against the last of these plagues: scientists who naysayed his progressive formulations. Edward G. Robinson portrays Ehrlich, his favorite role in a long career. And William Dieterle directs this work that breaks the era's taboos and stands alongside - perhaps eclipses - his The Story of Louis Pasteur and The Life of Emile Zola."

Edward G. Robinson portrays real-life German medical researcher Paul Erlich, the man who discovered and perfected "Formula 606," the cure for syphilis. The world at large would prefer to treat the disease as though it does not exist, so Erlich spends most of his life underfunded and frustrated. A no-nonsense dowager (Maria Ouspenskaya) has faith in Erlich, however, and thus provides the necessary funds to develop Formula 606. Once the serum is released to the public, Erlich's reputation is threatened when a handful of syphilitics die, ostensibly as a result of the "cure." Brought up on criminal charges, Erlich is exonerated by his old colleague Dr. Von Behring (Otto Kruger). Considered daring in its time for its exploration of a "taboo" subject, DR. ERLICH'S MAGIC BULLET holds up as one of Warner Bros.' most solid biopics, with a convincing performance from a nearly unrecognizable Edward G. Robinson.

Doctors | Health | Germany | Scientists | Criminals | Medical | Biographical | Diseases
This product is made-on-demand by the manufacturer using DVD-R recordable media. Almost all DVD players can play DVD-Rs (except for some older models made before 2000) - please consult your owner's manual for formats compatible with your player. These DVD-Rs may not play on all computers or DVD player/recorders. To address this, the manufacturer recommends viewing this product on a DVD player that does not have recording capability.

The Story of Louis Pasteur
$20
Add to Cart

A Dispatch from Reuters
$20
Add to Cart