Let other movie ice queens skate into happily-ever-after. Belita straps on her blades for the noir-on-ice thriller Suspense, a torrid tale of an ice-show star who commits adultery for the man she loves - and of the man who commits murder for her. 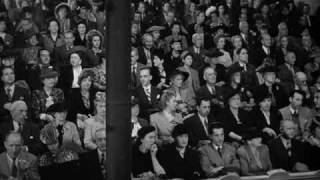 Let other movie ice queens skate into happily-ever-after. Belita straps on her blades for the noir-on-ice thriller Suspense, a torrid tale of an ice-show star who commits adultery for the man she loves - and of the man who commits murder for her. Frank Tuttle (This Gun for Hire, The Glass Key) directs; Barry Sullivan co-stars.

Belita's career was exceptional, even by Hollywood standards. A 12-year-old sensation at the 1936 Winter Olympics, the British-born beauty made several films in the 1940s that showcased her dazzling skating skills. But her artistry was not limited to the rink. Also an accomplished ballerina, she worked with Gene Kelly in 1956's Invitation to the Dance."

If Republic's skating star Vera Hruba Ralston could go "dramatic", so too could Monogram's skating star Belita. Produced by the enterprising King Brothers, SUSPENSE takes place in an ice-skating emporium owned by Frank Leonard (Albert Dekker). No-good heel Joe Morgan (Barry Sullivan) not only strongarms Leonard into sharing the establishment's profits, but also tries to move in on Leonard's wife Roberta (Belita). The plot thickens when Leonard is apparently killed by Morgan, only to return from the dead! But what really does Morgan in is his own checkered past, as personified by his vengeful ex-sweetheart Ronnie (Bonita Granville, in a truly offbeat characterization). Belita's ice-skating solos (staged by Nick Castle) and Philip Yordan's overly complicated script tend to weigh down the proceedings; still, SUSPENSE deserves to be seen, if for no other reason than its dazzling opening sequence.

Mystery | Love Triangle | Love Triangles | Swords & Sorcery
This product is made-on-demand by the manufacturer using DVD-R recordable media. Almost all DVD players can play DVD-Rs (except for some older models made before 2000) - please consult your owner's manual for formats compatible with your player. These DVD-Rs may not play on all computers or DVD player/recorders. To address this, the manufacturer recommends viewing this product on a DVD player that does not have recording capability.