Get email alerts for Christina Aguilera
58 ratings
Currently Out of Stock: We'll get more as soon as possible
Notify Me When Available
Add to Wishlist
Format:  CD
sku:  SSP 71594
Related products:
Christina Aguilera: Back to Basics (2-CD) for $16.50
Christina Aguilera for $6.97
Soundtrack: Burlesque for $8.20
Sia: Everyday Is Christmas for $18.10
Our customers love us! 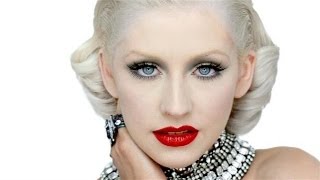 Billboard (p.44) - "[F]rom the fidgety intro of the dub-tastic opening title track to punk-brat driving song 'My Girls' to Aguilera's gloriously restrained delivery on 'All I Need,' the 18-song set shows an artist confident enough to take direct cues from her tuned-in creative team."

Subtlety not being part of Christina Aguilera's vocabulary, she trades the retro-swing of Back to Basics for the future-pop of Bionic, receiving assists from a roster that reads like a who's-who of progressive pop in 2010: M.I.A., Le Tigre, Peaches, and John Hill & Switch, known for their work with Santigold. But like the half-cyborg/half-diva illustration of the album cover, this revamp is only partial. Aguilera hedges her bets by adding a ballad from old friend Linda Perry, gets Tricky Stewart to produce a trio of cuts, drafts Polow da Don and Focus. to produce some heavy and slow R&B, respectively, letting enough air into the machines to reassure hesitant fans that she hasn't abandoned her roots. All this hesitancy means that for as many risks as it takes, Bionic doesn't feel daring. Apart from the stuttering opener of the title track and glassy chill of "Elastic Love," notably the two Hill & Switch productions, this never delivers the future shock it promises, but that's not necessarily a bad thing because the robot-diva hybrids are interesting even when they stumble. The deluxe edition of Bionic does suggest what the album could have been: it's supplemented by four bonus songs that are wildly imaginative, whether it's the clattering, chanting "Bobblehead," the cool synth glide of "Birds of Prey," the perfect new wave pop of "Monday Morning," or Sia's mournful ballad "Stronger Than Ever." In their place on the album proper are odes to fashion and fabulousness and power ballads, songs that play to Aguilera's persona without inhabiting it. The rest of the Bionic -- not just the hipster flirtations and Sia's trio of richly ruminative AAA ballads, but the tracks directly within Aguilera's wheelhouse, like Tricky Stewart's wildly successful, slinky "Desnudate" and the sultry slow burner "Sex for Breakfast" -- finds Christina not playing to expectations but simply acting as a natural diva and is all the more compelling for it. ~ Stephen Thomas Erlewine