There it is - Pacifica - a gleaming metropolis on the ocean floor. But the fabulous, futuristic city is seven hours away from doom as a giant asteroid hurtles toward a direct hit. Submerge yourself in waves upon waves of screen excitement. 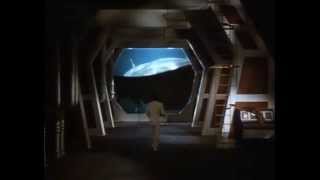 There it is - Pacifica - a gleaming metropolis on the ocean floor. But the fabulous, futuristic city is seven hours away from doom as a giant asteroid hurtles toward a direct hit. Good thing an all-star cast of steel-nerved stalwarts - including Stuart Whitman, Robert Wagner, Richard Basehart, Joseph Cotton and boxing legend Sugar Ray Robinson - is on hand. From Irwin Allen, the beloved disaster movie impresario behind The Poseidon Adventure, Voyage to the Bottom of the Sea and The Towering Inferno, comes the over-the-top underwater adventure City Beneath the Sea. Submerge yourself in waves upon waves of screen excitement.

Irwin Allen, praised in some circles as a science fiction genius and damned in others as a shameless schlockmeister, produced and directed this fanciful TV-movie. Set in the 21st century, the film concentrates on a group of colonists dwelling in a modernistic underwater city called Pacifica. The emphasis is on drama rather than special effects, as we see the deep-sea denizens struggling to cope with the pressures of their new existence--and their own personal animosities. Stuart Whitman heads a large cast of TV veterans, including TIME TUNNEL regulars James Darren, Robert Colbert and Whit Bissell, and onetime VOYAGE TO THE BOTTOM OF THE SEA star Richard Basehart (as the US President). Expanded from a short "demo" pilot film, CITY BENEATH THE SEA is the one Irwin Allen project that could have matured into a truly worthwhile TV series; unfortunately no network was interested in subsidizing this expensive effort.

Disaster | Science-Fiction | Future / Futuristic Worlds
This product is made-on-demand by the manufacturer using DVD-R recordable media. Almost all DVD players can play DVD-Rs (except for some older models made before 2000) - please consult your owner's manual for formats compatible with your player. These DVD-Rs may not play on all computers or DVD player/recorders. To address this, the manufacturer recommends viewing this product on a DVD player that does not have recording capability.