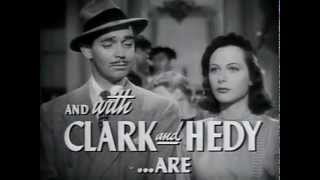 Soviet streetcar conductor Theodore (Hedy Lamarr) is as lovely as a Botticelli angel and as forbidding as a Moscow winter. American reporter McKinley B. "Mac" Thompson is as hunky and self-confident as Clark Gable (who happens to play the role). In pre-World War II Russia, the two share a comedy-and-action-filled adventure involving secret identities, a marriage of convenience, hairbreadth escapes and a thrilling tank-chase finale as Mac tries to help Theodore vamoose to the USA one step ahead of the corrupt secret police. Will Mac melt Theodore's icy heart? Will Theodore transfer her allegiance from Karl Marx to the Brooklyn Dodgers? Bet your last ruble the answer is da.

Inspired by NINOTCHKA, this film stars Clark Gable as McKinley Thompson, aka Comrade X, an American reporter smuggling stories out of Soviet Russia suggesting the country's imminent demise during the 1930s. When hotel porter Vanya Golubka (Felix Bressart) discovers his identity, he threatens to turn him in unless he agrees to help get his daughter Theodora (Hedy Lamarr), a counterrevolutionary threatening to party bosses, out of the country. The initially reluctant reporter is more positive about this arrangement after meeting the young woman, who can be convinced to leave only with the promise that she'll be allowed to promote her political beliefs in the U.S. When Thompson learns that the only way he can obtain a passport for Theodora is to marry her, he goes along gamely. But Soviet authorites eventually catch on to the scam, imprison the pair, and sentence them to death. When all seems lost, the counterrevolutionary forces led by Emil von Hofer (Sig Ruman) take control of the country, which has begun to resemble the Marx Brothers' Fredonia. COMRADE X was cowritten by the legendary Ben Hecht and features an excellent group of character actors.

Comedy, intrigue, and suspense are combined in this NINOTCHKA-inspired satire. Clark Gable is an American correspondent in Moscow who is blackmailed into marrying a die-hard communist played by Hedy Lamarr.

The Richest Girl in the World
$20
Add to Cart