Outstanding special effects and a name cast (headed by Gary Lockwood) highlight this space-frontier chiller that brings audiences to the terrifying edge of Doomsday. Can men and women of peace triumph over the awesome power of nuclear weapons? 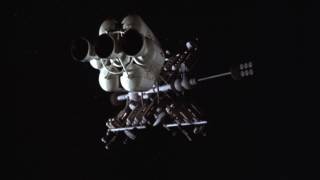 In the peaceful space colony called Earth II, even toy guns are banned. But something far more dangerous threatens this ideal world: a Chinese satellite armed with three nuclear warheads. The citizens of Earth II decide to disarm the warheads, despite China's warning that anyone who interferes will instigate a thermonuclear World War III. Outstanding special effects and a name cast (headed by 2001: A Space Odyssey co-star Gary Lockwood) highlight this space-frontier chiller that brings audiences to the terrifying edge of Doomsday. Can men and women of peace triumph over the awesome power of nuclear weapons? Earth II has an answer.

The all-purpose science fiction title EARTH II was utilized in 1971 for this TV pilot film. Producer/writers Allan Balter and William Read Woodfield consulted both NASA and the Rockwell Corporation to guarantee a modicum of authenticity for their futuristic teleplay. The story takes place in "Earth II", a self-contained space station orbiting the earth which houses 2000 people. Gary Lockwood, star of 2001: A SPACE ODYSSEY, appears as the commander of the station (note to fans of "Alvin and the Chipmunks": Lockwood's character name is David Seville!) The anecdotal plot explores the everyday operations of Earth II and the various trials and tribulations of its denizens.

Science-Fiction | Space Exploration | Space | China | Weapons
This product is made-on-demand by the manufacturer using DVD-R recordable media. Almost all DVD players can play DVD-Rs (except for some older models made before 2000) - please consult your owner's manual for formats compatible with your player. These DVD-Rs may not play on all computers or DVD player/recorders. To address this, the manufacturer recommends viewing this product on a DVD player that does not have recording capability.

17%off
Colossus: The Forbin Project
$12.50 Super Savings
Add to Cart