Despite Bowie's prowess in a world of dandies and ruffians, he may be overmatched in the ways of the heart: he's fallen for lovely Jubalon, the magnolia belle fancied by men of means from Natchez to New Orleans. 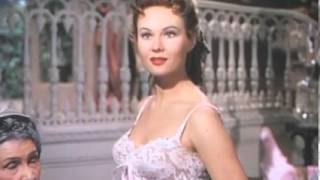 Homespun bayou lad Jim Bowie (Alan Ladd) is learning the courtly ways of 1825 Southern society, wearing only the finest suits and cravats and proving himself in business and at the gaming table. And should the occasion call, keeping handy the specially made blade - tempered with meteorite steel - that would make his name forever a part of American lore. Yet despite Bowie's prowess in a world of dandies and ruffians, he may be overmatched in the ways of the heart: he's fallen for lovely Jubalon (Virginia Mayo), the magnolia belle fancied by men of means from Natchez to New Orleans. Will her beauty be the only weapon more powerful than Bowie's Iron Mistress blade?

Though its title would seem to indicate a medieval swashbuckler, THE IRON MISTRESS is actually based on the life of American frontiersman Jim Bowie. Alan Ladd stars as the fearless, knife-wielding Bowie, who is first seen arriving in New Orleans to sell a supply of lumber. Bowie falls in love with duplicitous Creole lass Judalon de Bornay (a brunette Virginia Mayo), who inspires him to increase his riches and political power. When Bowie doesn't move up the ladder of success fast enough to suit her, the fickle Judalon weds another. Bowie eventually finds happiness in the arms of Ursula de Veremendi (Phyllis Kirk), the daughter of Texas' vice-governor. The film tactfully ends long before Bowie's rendezvous with destiny at the Alamo. THE IRON MISTRESS is based on the novel by Paul I. Wellman; the highlight of the novel, a fierce knife-and-rapier duel, is faithfully recreated here.

Adventure | Death | Playboy | Health | News | Gambling | Brothers | Families | Pirates | Love | Battles | Adventurers | Boats | Biographical
This product is made-on-demand by the manufacturer using DVD-R recordable media. Almost all DVD players can play DVD-Rs (except for some older models made before 2000) - please consult your owner's manual for formats compatible with your player. These DVD-Rs may not play on all computers or DVD player/recorders. To address this, the manufacturer recommends viewing this product on a DVD player that does not have recording capability.

The Proud Rebel
$10
Add to Cart

Customer Rating:
Based on 821 ratings.


Alan Ladd is good as usual. I recommend as a great advdenture