Give a Girl a Break
Warner Archive Collection (series)

Memorable for its Burton Lane-Ira Gershwin score and for the once-in-a-lifetime collaboration of three legendary musical-world directors: Stanley Donen behind the camera and Gower Champion and Bob Fosse on the other side of the lens. 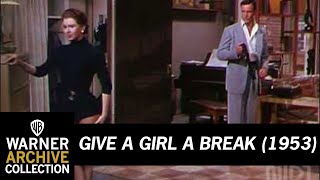 Give A Girl A Break (Original Theatrical Trailer)

When a temperamental star walks out of a big Broadway show, it's time to Give a Girl a Break. But which of the hopefuls will land the lead? Suzy (Debbie Reynolds) brings pizzazz. Joanna (Helen Wood) offers elegant sophistication. And lovely Madelyn (Marge Champion) is the director's former dance partner and former love.

This breezy backstager is memorable for its Burton Lane-Ira Gershwin score and for the once-in-a-lifetime collaboration of three legendary musical-world directors: Stanley Donen (Singin' in the Rain) behind the camera and Gower Champion and Bob Fosse (future directors of, respectively, Broadway's Hello, Dolly and Chicago) bringing dazzling dance grace and physicality to the other side of the lens.

In one of his first solo directorial efforts after pairing with Gene Kelly as director of ON THE TOWN and SINGIN' IN THE RAIN, Stanley Donen lets Broadway's best dancers and choreographers--Gower and Marge Champion and Bob Fosse--strut their stuff in this light musical comedy about three producers of a Broadway musical trying to find the girl to play their show's star. After holding auditions, each producer picks a different girl, leading to a song-and-dance showdown between the men and the girls up for the part. Similar in basic format to ON THE TOWN (three guys plus three girls equals fun, dancing, and romance) and pulling in Debbie Reynolds from her starring role in SINGIN' IN THE RAIN, this film isn't much of a departure for Donen as he began his long career in musical comedies (later shifting his skills to other genres such as romance and suspense as the film musical fell out of fashion), but it's an interesting stepping-stone on his way to the following year's SEVEN BRIDES FOR SEVEN BROTHERS and later musicals FUNNY FACE and DAMN YANKEES. Gower Champion and his dance partner and wife, Marge, make their musical numbers come alive with verve and style, and Debbie Reynolds, as always, charms with her enthusiasm.

Broadway's greatest dancers and choreographers combine for a backstage tale that's more knowing than most. Three young performers up for the lead in a Broadway show think they've got it when they form romantic attachments to the men with the show. Two songs in the picture are the only collaboration between lyricist Ira Gershwin and composer Burton Lane.

Adventure | Dance | Rags To Riches | Theatrical Release
This product is made-on-demand by the manufacturer using DVD-R recordable media. Almost all DVD players can play DVD-Rs (except for some older models made before 2000) - please consult your owner's manual for formats compatible with your player. These DVD-Rs may not play on all computers or DVD player/recorders. To address this, the manufacturer recommends viewing this product on a DVD player that does not have recording capability.