Director John Cromwell's delicate, achingly romantic film is based on Sir Arthur Wing Pinero's play, written in a post-World War I era of broken men returning to families who could not recognize them. 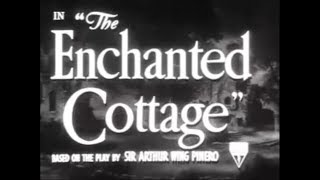 After a crash disfigures his face and maims his body, pilot Oliver Bradford (Robert Young) hides from family and friends in a seaside cottage. There he befriends homely, gentle Laura Pennington (Dorothy McGuire). The two marry for companionship - until some rare magic within the cottage transforms them into ardent and beautiful lovers.

Director John Cromwell's delicate, achingly romantic film is based on Sir Arthur Wing Pinero's play, written in a post-World War I era of broken men returning to families who could not recognize them. When history sadly repeated itself, World War II film audiences likewise embraced a story of the transcendent power of love. The film so moved Young that he named his own California home The Enchanted Cottage.

Based on the successful World War I play by Sir Arthur Wing Pinero, ENCHANTED COTTAGE is a romantic wartime fantasy glowing with the timeless, metamorphic power of love. Robert Young stars as Oliver Bradford, a handsome, wealthy man called to active duty on the eve of his wedding. He returns early from the war, having been physically and emotionally scarred in a plane crash. Deserted by his fiancée, he withdraws from society by renting the cottage that was supposed to be the site of their honeymoon. A plain, painfully shy woman, Laura Pennington (Dorothy McGuire), also hiding from the world's cruelty, lingers by the seaside cottage. The unwanted loners befriend each other and agree to marry, as no one else will have them. On their wedding night in the enchanted cottage a miraculous transformation occurs. Directed by John Cromwell (OF HUMAN BONDAGE, THE PRISONER OF ZENDA) with warmth and an emotional realism that perfectly balances the film's expressive fantastical flourishes, ENCHANTED COTTAGE is a classic, substantive, multihandkerchief tearjerker.

Ever After: A Cinderella Story (Blu-ray)
$12.20 Super Savings
Add to Cart

19%off
The Spiral Staircase
$16.20 Super Savings
Add to Cart

Customer Rating:
Based on 3602 ratings.


All 10 movies that I purchased with this company have been perfect in quality and price. I used to shop at ebay and amazon......not anymore!