They Only Kill Their Masters PG

A sheriff attempts to unravel the death of a pregnant woman, supposedly at the hands of her Doberman pinscher. 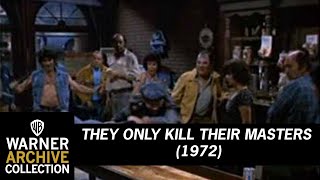 They Only Kill Their Masters (Original Theatrical Trailer)

Murphy's been charged with a savage murder, condemned to die, then given a reprieve when the autopsy of the victim reveals startling new evidence. Murphy is a Doberman Pinscher.

James Garner portrays affable lawman Abel Marsh, who takes possession of the dog and of the case that's disrupted the tiny California coast town of Eden Landing. Marsh will interview suspects. Suffer a knock or two to the noggin. See the corpse count grow. And realize that good ol' Murphy may be the biggest clue to the whole deadly shebang. But Murphy himself won't talk, so sit... stay... watch as Garner and an aces cast of Katharine Ross, Hal Holbrook, Peter Lawford and more add to the who's who of a clever whodunit.

An easygoing police chief in a small town returns from his vacation to find a local girl murdered, and her faithful Doberman blamed. His efforts to collar the real killer find him digging up secrets all over town.

A sleepy California resort community is jolted awake when a woman turns up dead on the beach. At first, it appears that the victim was done in by her doberman pinscher, but soon it becomes apparent that someone drowned her. And as March, the police chief, begins investigating the crime, he discovers that many of the citizens have some sordid secrets they'd like to keep hidden. Can March solve the murder, and restore calm in the town'

The Doberman Gang / The Daring Dobermans
$17.90
Add to Cart

The Girl in the Empty Grave
$20
Add to Cart