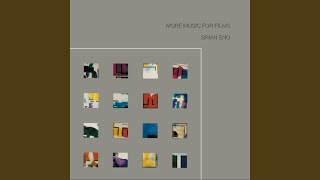 Personnel: David Hill (electronics).
Liner Note Author: Michael Bracewell.
In addition to his participation in the original incarnation of Roxy Music, and his collaborations with and influence on such seminal artists as David Bowie, Talking Heads, and U2, Brian Eno's solo experiments with electronic ambient music in the 1970s have left a defining influence on succeeding generations. Their impact has helped shape movements as diverse as New Age, electronica, and world fusion. It is a particular testament to Eno's genius that his original ambient albums sound as fresh and vital today as they did upon their release.
2005'S MORE MUSIC FOR FILMS is not a pioneering work on par with MUSIC FOR AIRPORTS or MY LIFE IN THE BUSH OF GHOSTS. In fact, it takes its cues from Eno's 1978 album MUSIC FOR FILMS (and often treating and remixing tracks from that release). But where MUSIC FOR FILMS is delicate, drifting, and ephemeral, MORE MUSIC FOR FILMS is full of pulsing rhythms, burbling bass, shifting textures, and startling sonic treatments. The tracks are quite short, establishing ideas and moving on, leaving a comet's tail of cinematic images. But the overall effect is powerful. Even when building on his ideas from the 1970s, Eno's creations outdistance the legions of artists who have followed in his wake.