Pride of the Marines 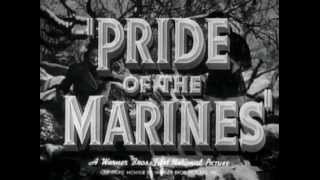 Oscar-nominated story based upon the real-life U.S. Marine Al Schmid who was blinded while fighting the Japanese and struggled to adapt to civilian life. Starring Oscar-nominees John Garfield ("The Postman Always Rings Twice," "Gentleman's Agreement") and Eleanor Parker ("Interrupted Melody").

John Garfield stars as Al Schmid, a true-life marine who served in World War II. Schmid becomes a hero at Guadalcanal, defending a machine gun post and killing 200 Japanese before he is permanently blinded by a grenade. Despite being awarded the Navy Cross, Schmid returns home embittered by his disability. After a long and grueling convalescence, he is shaken back to life by his girl friend Ruth (Eleanor Parker) and his best pal (Dane Clark), neither of whom allow Al to wallow in self-pity. The pride in PRIDE OF THE MARINES comes from Al Schmid's ultimate realization that his sacrifice was worthwhile, and that his sightlessness need not prevent him from leading a full and rewarding life.

Enemies | Big Battles | War | Christmas | Military | Physically Impaired | Trains | Japan | Soldiers | Love | Medical | Battles | Weapons | America | Biographical | Reading
This product is made-on-demand by the manufacturer using DVD-R recordable media. Almost all DVD players can play DVD-Rs (except for some older models made before 2000) - please consult your owner's manual for formats compatible with your player. These DVD-Rs may not play on all computers or DVD player/recorders. To address this, the manufacturer recommends viewing this product on a DVD player that does not have recording capability.