Swindlers Quincy and Jason, posing as master and slave ride into backwater prairie towns. Jason is sold to the highest bidder, Quincy later springs him loose and they split town, split the cash and head on to the next sucker. 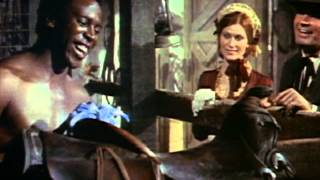 Posing as master and slave, likable swindlers Quincy (James Garner) and Jason (Lou Gossett) ride into backwater prairie towns in 1875. And after Quincy intones and Jason moans, Jason is sold to the highest bidder. Quincy later springs him loose and they split town, split the cash and head down the road to the next sucker. It's an effective scam for these smart and nimble schemers - until they cross paths with an equally clever con woman (Susan Clark) and an irate former customer (Edward Asner). "What could have so easily been the most tasteless picture of the year turns out to be one of the funniest," the Los Angeles Times said about this comedy with a conscience. Enjoy the fun as two beloved and award-winning actors play roving rogues who put bigots in their place, all part of the Skin Game"

A wry comedy about two bickering friends, one white and the other black, who travel through the pre-Civil War South pulling off the ultimate scam. Garner "sells" Gossett only to "steal" him back, the two making off with the cash.

Race Relations | Scams And Cons | Switching Roles | On-The-Run | Recommended | Theatrical Release
This product is made-on-demand by the manufacturer using DVD-R recordable media. Almost all DVD players can play DVD-Rs (except for some older models made before 2000) - please consult your owner's manual for formats compatible with your player. These DVD-Rs may not play on all computers or DVD player/recorders. To address this, the manufacturer recommends viewing this product on a DVD player that does not have recording capability.

19%off
Support Your Local Sheriff
$16.20 Super Savings
Add to Cart