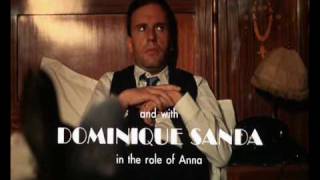 A man named Clerici (Jean-Louis Trintignant) attempts to escape his emotional past by subscribing to totalitarianism in Bernardo Bertolucci's masterpiece of Italian cinema. But when Clerici is asked to kill a leftist professor to show his loyalty, he finds that the decision to become a "conformist"--to live by society's rules--requires him to ignore his morals.

The film that made Bernardo Bertolucci's international reputation, THE CONFORMIST (based on Alberto Moravia's novel) is equal parts film noir, Freudian melodrama, and political commentary. The hero, Marcello Clerici (Jean-Louis Trintignant), joins Italy's fascist party, marries a simpering bourgeois woman, and agrees to assassinate the university professor who once acted as his mentor, all to become a "normal" member of society. As his psyche unravels--a homosexual encounter at age 13, his father's illness, his desire for the professor's wife, Anna (Dominique Sanda)--Bertolucci gradually shows that Clerici wants to become a robot in order to forget the messiness of life. But Clerici is moral enough at heart to begin putting off the murder in true Hamlet fashion. Bertolucci evokes the antiseptic fascist bureaucracy, the charming circle of the professor, and the bloody outcome of moral bankruptcy with equally arresting visuals. The narrative is nonlinear, but the arc is clear; as Clerici's smug, self-satisfied air comes undone, Bertolucci wants every Italian to answer for their own behavior when the fascists came.