Ginger Rogers and Dennis Morgan show they still have plenty of screen chemistry in this engaging blend of romance, comedy and courtroom thriller. Leading the fine supporting cast is Thelma Ritter, who shines as a dumb-bunny juror. 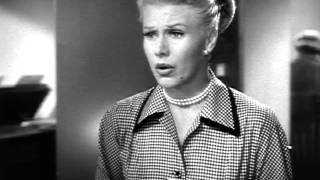 Accident? Or murder? A love-nest death is the focus of a headline-grabbing trial. But the real story may be going on in the jury room, where a colorful cross-section of American citizens quip and quibble their way through deliberations - and where a single woman (Ginger Rogers) and a married man (Dennis Morgan) begin to fall in love. The stars of Kitty Foyle, the film that earned Rogers a 1940 Best Actress Oscar®, show they still have plenty of screen chemistry in this engaging blend of romance, comedy and courtroom thriller. Leading the fine supporting cast is Thelma Ritter, who shines in a hilarious turn as a dumb-bunny juror who can't decide if the defendant is guilty or not guilty because "I wasn't there!"

The Ben Hecht-Charles MacArthur Broadway comedy LADIES AND GENTLEMEN formed the basis of the Warner Bros. laughspinner PERFECT STRANGERS. The title characters are Terry Scott and David Campbell, played by Ginger Rogers and Dennis Morgan. She's a divorcee, he's a husband and father. Terry and David are thrown together by fate -- or rather, the LA judicial system. While serving as jurors on a murder trial, the two fall in love. Ironically, the woman on trial allegedly killed her husband because he'd asked for a divorce. The seriocomic tension develops on two levels: will juror Isobel Bradford (Margolo Gillmore) be able to sway the others to vote for the death penalty, and will Terry and David continue to pursue their romance at the expense of the happiness of others'

Romance | Love Triangle | Love Triangles | Romances | Love
This product is made-on-demand by the manufacturer using DVD-R recordable media. Almost all DVD players can play DVD-Rs (except for some older models made before 2000) - please consult your owner's manual for formats compatible with your player. These DVD-Rs may not play on all computers or DVD player/recorders. To address this, the manufacturer recommends viewing this product on a DVD player that does not have recording capability.

18%off
Witness for the Prosecution
$16.40 Super Savings
Add to Cart

Anatomy of a Murder
$17.98 Spring Sale
Add to Cart