Deceased drifter Mike (Hutton) arrives in Heaven and quickly falls for newborn soul Annie (McGillis), soon to start her assignment on Earth. When Annie leaves, Mike follows, risking all to find her with no memories of their previous existence. 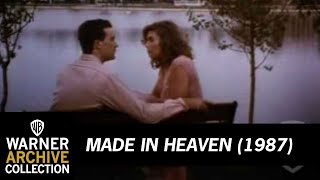 Made In Heaven (Original Theatrical Trailer)

Can love bridge the gap between Earth and Heaven? Moviemakers have thought so for decades. And the pursuit of eternal bliss has never been so sly, engaging or magical as when Timothy Hutton and Kelly McGillis strike up a romance Made in Heaven.

Deceased drifter Mike (Hutton) arrives in Heaven and quickly falls for newborn soul Annie (McGillis), soon to start her assignment on Earth. When Annie leaves, Mike follows, risking all to find her in her new identity with neither having memories of their previous celestial existence.

Mike Shea (Timothy Hutton) dies and goes to heaven, where he falls in love with Annie (Kelly McGillis). They get married and are about to live happily ever after for all eternity when Annie is reincarnated and sent down to earth. Lost without her, Mike makes a deal with his guardian angel to let him reincarnate as well so he can find her. The only problem is neither will remember more than slight feelings and intuitions of their life in heaven, and they will have only 30 years to find each other.

Brimming over with touches both clever and poignant, this romantic saga is a shamelessly perfect date movie and a story of beautiful inspiration for the noncynical. There's also a lot of great music from composer Mark Isham and Neil Young, whom both also appear in the film, as does Tom Petty, Ric Ocasek, Amanda Plummer, Ellen Barkin, writer Tom Robbins, and saxophone legend Pee Wee Ellis. Director Alan Rudolph directed from a screenplay by producers Bruce Evans and Raymond Gideon.

MADE IN HEAVEN begins with the untimely death of its hero and his arrival in heaven. After some initial adjustments, he meets Annie and falls in love. Annie is a new soul due to be reborn, and he must risk everything and return to Earth to find her.