He's guaranteed to put some life in your afterlife. 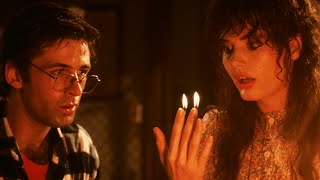 In the surreal, wonderfully cartoon-like comedy BEETLEJUICE, a childless couple, Barbara and Adam (Geena Davis and Alec Baldwin), move to the country only to be killed in a car accident while passing over a quaint covered bridge. Their ghosts return to their beloved Victorian home, and find the HANDBOOK FOR THE RECENTLY DECEASED, which not only lets them know they're dead, but comes in handy when they learn that they can continue to live in their house, even though a new family--from the land of the living--is moving in. The new owners, fresh from the city, are quite a strange group themselves, and include the overpowering hipster mom Delia (Catherine O'Hara), her pompous SoHo interior designer Otho (Glenn Shadix), her meek husband Charles (Jeffrey Jones), and their morose teenage daughter Lydia (Winona Ryder), who befriends the ghostly couple. Though the threesome attempt to scare Delia from ruining the house with redecoration and her unpleasant personality, their attempts fail. As a last resort, they call upon the services of the demented, terrifying, but hilarious "bioexorcist," "Beetlejuice" (Michael Keaton). Director Tim Burton scores big with witty site gags, incredible special effects and sets, and a unique ensemble of characters. BEETLEJUICE is a visually inventive and imaginative comedy taken to a uniquely grotesque and funny level by the manic performance of Michael Keaton in the title role.

What's a couple of stay-at-home ghosts to do when their beloved home is taken over by trendy yuppies' They call on Beetlejuice, the afterlife's freelance bio-exorcist to scare off the family - and everyone gets more than she, he or it bargains for! Tim Burton guides this PG-rated comedy monsterpiece whose stars include Alec Baldwin, Geena Davis, and Winona Ryder. And Michael Keaton is Beetlejuice, the ghost with the most who flings one-liners, spins into grotesque forms, gobbles insects, and who just can't leave the ladies (living or dead) alone. Ghoul love it!