The Duncan Sisters (Rosetta and Vivian) hit the ground running in their only Talkie Era feature, dodging through city streets (they're late for work) while a steadily growing mob pursues them. 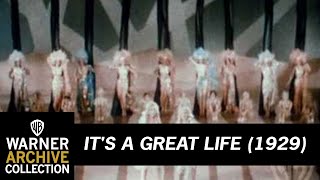 The Duncan Sisters (Rosetta and Vivian) hit the ground running in their only Talkie Era feature, dodging through city streets (they're late for work) while a steadily growing mob pursues them. Alas, It's a Great Life did not get the Duncans' film career off and running, so sisters Rosetta and Vivian returned to touring as the Topsy and Eva characters that had made them popular. Yet, the film - a tale of a sister act divided by romance, then reunited - shimmers with atmosphere, no small amount of wit, two color sequences and the vaudeville pizzazz of the sisters. "The opening scenes are far from conventional. This production is so much more pleasing than the usual run of such yarns" (Mordaunt Hall, The New York Times).

The vaudeville and Broadway "sister act" of Vivien and Rosetta Duncan, best known for their characterizations of Eva and Topsy in UNCLE TOM'S CABIN, star in the creaky backstage musical melodrama IT'S A GREAT LIFE. The ladies are cast as travelling entertainers Babe and Casey Hogan, who work their way up the ladder from the small time to the Palace. The act breaks up when swell-headed Jimmy Dean (Lawrence Gray) marries Babe, but Casey rushes back to her sister's side when the latter is stricken by a serious illness. As she coaxes Babe back to health, Casey describes the "big act" she plans to stage, whereupon the film segues into an elaborate Technicolor sequence which has about as much to do with the rest of the film as the invasion of the Huns. Children of the theatre, Vivien and Rosetta Duncan were unable to scale down their performances for the more intimate demands of the camera, which is why they lost the lead roles in BROADWAY MELODY (1929) to Bessie Love and Anita Page. But having signed the Duncans to a one-picture contract, MGM had to put them in something -- hence the existence of IT'S A GREAT LIFE.

Romance | Romances | Behind The Scenes | Love
This product is made-on-demand by the manufacturer using DVD-R recordable media. Almost all DVD players can play DVD-Rs (except for some older models made before 2000) - please consult your owner's manual for formats compatible with your player. These DVD-Rs may not play on all computers or DVD player/recorders. To address this, the manufacturer recommends viewing this product on a DVD player that does not have recording capability.