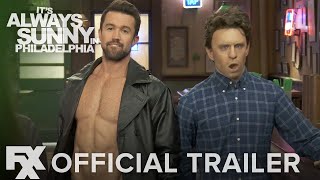 Philadelphia is known as "The City of Brotherly Love," but the town may soon be famous for its bad behavior thanks to this mean-spirited comedy. Not for the easily offended, IT'S ALWAYS SUNNY--as the kids call it--is one dark sitcom. Still, it garners critical praise and loyal fans with its smart writing. Rob McElhenney, Charlie Day, Glenn Howerton, and Kaitlin Olson star as friends who run Paddy's Irish Pub. Fueled by alcohol, vanity, and selfishness, the foursome has a series of misadventures as high on the laugh scale as they are in their cringe quotient. Though most sitcoms don't joke about crack addiction, abortion, and racism, IT'S ALWAYS SUNNY IN PHILADELPHIA turns these subjects into comedy goldmines. Season 3 in particular counts a dumpster baby, a dead mom, Fatty McGoo, the aluminum monster, a registered sex offender, serial killers, a retarded person, fire, and bums--lots and lots of bums--among its guest stars. Last season, veteran actor Danny DeVito returned to TV to play a misanthropic patriarch and, yes, he's still around. This release includes the entire third season, plus an intimate look at the possibly incestuous McPoyle Brothers, a gag reel, and a number of other supplemental features.