Summoned to the college infirmary, two parents are shocked to find their "perfect" son strapped down and bound in restraints. Told that his violent behavior is the result of smoking PCP, they temporarily commit him to a psychiatric ward. 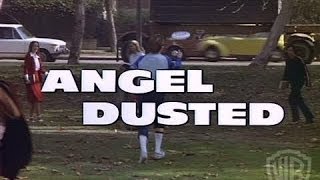 A teenager's drug dependency threatens to tear his family apart in this powerful tale of addiction and its collateral damage. Summoned to the college infirmary, two parents (Jean Stapleton and Arthur Hill) are shocked to find their "perfect" son (John Putch) strapped down and bound in restraints. Told that his violent behavior is the result of smoking PCP, they temporarily commit him to a psychiatric ward, never suspecting the true ordeal about to begin. Co-starring Patrick Cassidy, a young Helen Hunt and Stapleton's real-life son Putch in a terrific lead performance, Angel Dusted features an early score by award-winning composer James Horner. Based on the book by Ursula Etons, the film was adapted by Darlene Craviotto, who also plays the boy's psychiatrist.

PCP, a deadly drug commonly known as Angel Dust, made its first destructive appearances on the street in the late 1970s. In ANGEL DUSTED, Jean Stapleton plays a cloistered housewife/mother who knows little and cares less about drug problems. Her son is a hard-working college student who decides to experiment just once with marijuana. The boy freaks out after smoking pot laced with PCP--and it doesn't look like he'll ever totally recover. Adding texture to the film is the presence of the film's screenwriter Darlene Craviotto as the boy's psychiatrist--and the presence of Jean Stapleton's real-life son John Putch in the role of her on-screen son. ANGEL DUSTED was based on a book by Ursula Etons.

Drugs | Families
This product is made-on-demand by the manufacturer using DVD-R recordable media. Almost all DVD players can play DVD-Rs (except for some older models made before 2000) - please consult your owner's manual for formats compatible with your player. These DVD-Rs may not play on all computers or DVD player/recorders. To address this, the manufacturer recommends viewing this product on a DVD player that does not have recording capability.

Me and Earl and the Dying Girl
$5.59 Spring Sale
Add to Cart