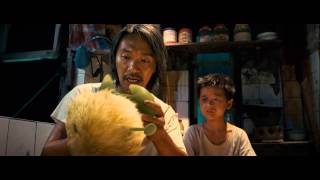 Chinese writer-director-comedian Stephen Chow (SHAOLIN SOCCER, KUNG FU HUSTLE) takes a break from his usual action-comedy adventures for an E.T.: THE EXTRA-TERRESTRIAL-inspired tale of family bonds and personal integrity. Chow stars as Ti, a down-on-his luck widower who must funnel all of his wages into the private school education of his nine-year-old son, Dicky (Xu Jiao). The two are reduced to living in an abandoned building and scrounging for necessities, as well as playing nightly games of "clobber the cockroaches." Ti tries to appease Dicky's desire for a trendy new toy by bringing home a mysterious green orb found at a garbage dump. Dicky is soon shocked when the orb transforms into a perky doglike alien being, dubbed "CJ7." When Dicky witnesses CJ7's otherworldly powers he imagines CJ7 to be the answer to all of his school troubles: passing tests, excelling in gym class, and overcoming the school bully. But CJ7 is not as all-powerful as Dicky believes, and when tragedy strikes the family both Dicky and CJ7 must overcome doubt to reveal their true inner strength. Both CJ7's creature animation and a side order of Chow's kung fu kinetics provide plenty of laughs for kids. At the same the film's adult themes of social inequality, honesty, and self-sacrifice will give kids and parents plenty to discuss once the film is over. Frequently silly but genuinely heartfelt, CJ7 features enough of Chow's trademark twists to make for a unique family entertainment experience.

When a poor father brings home a mysterious alien "pet" from a local junkyard, he and his son learn a valuable lesson about the true nature of family and the things money can't buy.

Fireplace and Melodies for the Holidays (DVD)
$3.98 on Sale
Add to Cart