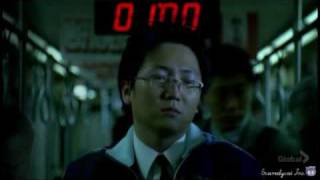 Combining comic book style and geeky in-jokes, HEROES is a stellar series that draws comparisons to fan favorites such as LOST and THE X-FILES. But thanks to its well-drawn characters and intricate plot, this drama reels in more than just superhero fans. HEROES revolves around the premise of seemingly ordinary people developing fantastic powers. There's Claire (Hayden Panettiere, ICE PRINCESS), a Texas cheerleader who can't be killed. Matt (Greg Grunberg, ALIAS) is a cop in Los Angeles who can read minds. New Yorker Peter (Milo Ventimiglia, GILMORE GIRLS) has the power to adopt other heroes' abilities, while his politician brother (Adrian Pasdar, JUDGING AMY) has a special power of his own. Though the show boasts many other characters, its secret weapon is Hiro (Masi Oka), a Japanese office worker who is delighted to discover he can move through space and time. But heroes wouldn't be heroes if there weren't villains and a coming apocalypse to fight, and the show features a truly creepy bad guy in the seemingly omnipotent Sylar (Zachary Quinto). In addition to all the episodes from the first season, this release also includes a never-before-seen, 73-minute version of the show's pilot.

Heroes: Saving Jewish Lives from the Nazis
$15.20
Add to Cart