In the farthest reaches of space, something has gone terribly wrong. 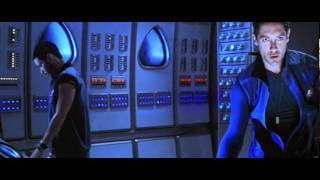 The gripping story of a deep space search and rescue mission to recover the last remaining survivor of an abandoned medical ship. The six member crew of the Nightingale 229 (including Spader, Bassett, and Forster) answer the mysterious man's (Facinelli) desperate plea for help, but when they collect him, they discover that their problems have compounded. In addition to sensing evil powers within the alien artifact he's brought with him, it appears that a nearby star is about to explode, taking the Nightingale with it. The race is on for survival in this atmospheric action-thriller.

The deep-space medical rescue ship Nightingale 229 is called into action. The mission: rescue the survivor of a secret expedition to a mining planet. The mysterious young man they pick up has uncovered an alien artifact which endows strange powers on anyone who comes in contact with it, but it may also be a threat to human life. It's up to co-pilot Vanzant (Spader) and medical officer Evers (Bassett) to stop the madness and get the ship home, before the nearby giant star explodes.