The Film Hackers Tried To Get Banned 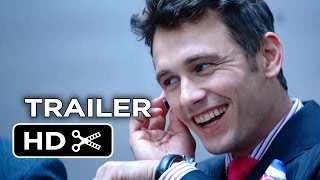 A.V. Club - 12/24/2014
"[T]he North Korea scenes are often very funny, with many of the jokes coming at the expense of the fish-out-of-water visitors."
Chicago Sun-Times - 01/01/2015
"[R]idiculously over-the-top and cartoonishly goofy....THE INTERVIEW sticks to the anything-for-a-laugh plan for nearly the entire journey..."
Rolling Stone - 12/24/2014
3 stars out of 4 -- "THE INTERVIEW hits the sweet spot for raunchy fun and spiky lampooning because Franco and Rogen are effing hilarious and fearless about swinging for the fences."
Washington Post - 12/24/2014
"[T]he humor is generally harmless and even endearing, especially when Skylark winds up bonding with Kim..."

The CIA recruits a talk-show host (James Franco) and his producer (Seth Rogen) to kill North Korean leader Kim Jong-un in this comedy from writer/director duo Rogen and Evan Goldberg (THIS IS THE END). Franco plays Dave Skylark, a vapid talk-show host known for chasing celebrity gossip, while Rogen is his producer Aaron Rapaport, who's desperate to do more serious journalism. When Dave discovers that North Korean leader Kim Jong-un (played here by Randall Park) is a big fan of his show, the pair decide to arrange an interview with him in order to boost their credibility. And the CIA, in turn, decide to use these two and the access they'll have to assassinate Kim. Aaron is all for it, but Dave is an easily swayed idiot who quickly falls under Kim's spell, and begins to see the dictator as a wounded man-child rather than someone worth killing.

76%off
The Making of Firefighter Fundraising Calendar (DVD)
$3.18 Winter Sale
Add to Cart