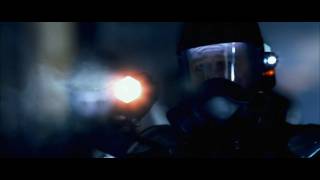 Writer/director Neil Marshall earned the respect of horror devotees with his first two features, DOG SOLDIERS and THE DESCENT, refreshing and scary twists on the werewolf and expedition-gone-wrong genres. Where those works exemplified a respect for pure horror, devoid of the tension-spoiling comedy that infects most fright films, DOOMSDAY is Marshall's love letter to the post-apocalyptic action-exploitation films of the 1980s. Bubbling over with action, gore, and dark humor, his third film has all the bases covered for a fun, knowingly corny viewing experience.

After a deadly plague results in the quarantine of the entire country of Scotland (in a scene reminiscent of I AM LEGEND), a wall is built around the country preventing anyone from going in or out. Thirty years later, the British government believes everyone within the wall to be dead, but when they find signs of life and learn of the possibility of a cure, a team of specially trained agents led by Eden Sinclair (Rhona Mitra) become the first outsiders to venture inside the country since the epidemic. They discover that there are plenty of survivors who have splintered into fierce, warlike tribes, living in a lawless society where cannibalism and murder are the order of the day. Astute viewers will have a blast playing "spot the influence," with loving, obvious nods to ESCAPE FROM NEW YORK, ALIENS, 28 DAYS LATER, and the MAD MAX films. At the film's halfway point, Marshall switches gears, transforming the film from a punk-informed futuristic action film into a medieval-style chase film, utilizing Scotland's castles and sumptuous green landscapes to the fullest. Mitra is an exciting physical presence as Eden, a female version of NEW YORK's Snake Plissken, and the great supporting cast includes Bob Hoskins and Malcolm McDowell.

To save humanity from an epidemic, an elite fighting unit must battle to find a cure in a post-apocalyptic zone controlled by a society of murderous renegades.