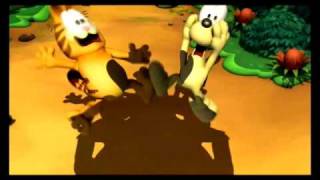 Garfield emerges victorious at the end of every single Fun Fest, a competition for the best in comic strip characters. It's a given; he can do it with his paws tied behind his back. But this year, it looks like a dashing new contestant by the name of Ramone is going to give everyone's favorite fat cat a run for his lasagna, especially after the G-Man's usual partner-in-fun, Arlene, decides to pair up with the suave new competition and Garfield is saddled with Odie. Can Garfield remain on top' Or is he going to have to slum it with "Family Circus" or, worse yet, go the way of "Marmaduke'" The entire Garfield gang returns for his second all-computer-generated feature-length outing voiced by cartoon vocal actor extraordinaire Frank Welker and written by Garfield creator Jim Davis.

Welcome to FunFest - the annual talent competition for the funniest comic strip in Cartoon World. As you can probably guess, a certain lasagna-loving, tubby tabby wins it every year. So why should this year be any different' Well, there's a new contender, that's why. His name is Ramone, and he's tall, he's handsome, and he just might unseat Garfield as king of the comic strip! Don't miss a single hilarious moment as the world's most comical fat cat competes - and eats - his way through his latest adventure. Let the Garfield games begin!