In the Line of Fire (Blu-ray) R 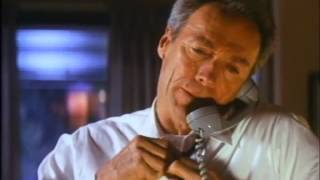 "What's kept you in the game all these years'"--Mitch Leary (John Malkovich) to Frank Horrigan (Clint Eastwood)
"Why don't we get together and have a drink' We could talk about that."--Horrigan
"Oh, I'd love to, but I think the less you know about me the better."--Leary
"Oh, why'"--Horrigan
"Because I'm planning to kill the president."--Leary
"Oh, now you shouldn't have gone and said that. It's a federal offense to threaten the president. You could go to jail, even if you don't mean it."--Horrigan
"I mean it all right."
- Leary
"What makes you think he'll call again'"--Lilly Raines (Rene Russo)
"Oh, he'll call again. He's got, uh, panache."--Horrigan
"Panache'"--Raines
"Yeah, it means flamboyance."--Horrigan
"Mm, I know what it means."--Raines
"Really' I had to look it up."
- Horrigan
"Do you make an effort to be obnoxious, or is it a gift'"--Raines
"It's a gift."
- Horrigan
"There's no cause left worth fighting for, Frank. All we have is the game. I'm on offense, you're on defense."
- Leary to Horrigan

New York Times - 07/09/1993
"...Movie making of the high, smooth commercial order that Hollywood prides itself on but achieves with singular infrequency....[Eastwood lends] tone and class..."
Rolling Stone - 08/05/1993
"...Terrifically exciting..."
Variety - 07/19/1993
"...A proficiently made thriller....Eastwood splendidly gives Horrigan humor, grit and imagination..."
Entertainment Weekly - 07/16/1993
"Anyone on the hunt for surefire movie concepts need look no further than IN THE LINE OF FIRE....Engrossing..."
Sight and Sound - 05/01/2002
"...Clint Eastwood excels here as a Secret Service agent with an Achilles' heel....The rest of the cast is equally impressive..."
Premiere - 09/01/2005
"It's Malkovich, as an assassin tormenting Eastwood's aging Secret Service agent, who gives this movie its pulse."
Empire - 09/01/2008
"Clint Eastwood followed his Oscar triumph UNFORGIVEN with a tough turn as a veteran secret service man....Riveting..."

Aging secret service agent Frank Horrigan (Clint Eastwood), on duty the day John F. Kennedy was assassinated in Dallas, is still unable to forget his failure on that fateful day, even as he nears retirement in 1993. When Mitch Leary (John Malkovich), a psychotic man calling himself Booth, threatens to kill the current president, Horrigan is the only one who takes the threat seriously. Over time, a cat-and-mouse game develops between the potential assassin and the agent; Horrigan sees the game as a chance to redeem his earlier failure and escape a life that has fallen into alcoholism and self-pity. With his only allies his partner (Dylan McDermott), who realizes he can't handle being a secret service agent and wants to resign, and a female agent (Rene Russo) whom he alternately annoys and attracts, Horrigan takes on Leary one-on-one in a fight to save the president, his job, and his self-respect. Directed with panache and precision by Wolfgang Petersen, IN THE LINE OF FIRE is an expertly crafted thriller that features spectacular performances by Eastwood and Malkovich.