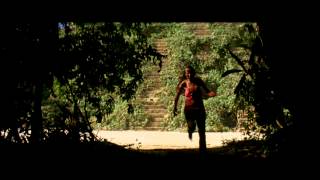 Author Scott Smith adapts his own popular 2006 novel in this unsettling and surprising horror yarn. In its first half hour, THE RUINS seems to be cut from the same "body-count-of-young-Americans-abroad" cloth as HOSTEL and TURISTAS, but the film has a supernatural element not present in either of those works, keeping it clear of the overpopulated slasher and torture genres. A talented young cast also ensures that Smith's tale reaches the screen with plenty of genuine chills intact. While vacationing on the Yucatan Peninsula, 20-something Americans Jeff (Jonathan Tucker), Amy (Jena Malone), Eric (Shawn Ashmore), and Stacy (Laura Ramsey), befriend German traveler Mathias (Joe Anderson), who invites them to accompany him into the jungle to meet up with his archaeologist brother at an "off the map" Mayan temple. They agree, but once they arrive, angry locals shoot one of their party and refuse to allow them to leave. The Americans and Mathias retreat to the top of the temple, only to find the archaeological camp deserted. Mathias falls into the temple and is badly injured, but that is only the beginning of their troubles, as it soon becomes apparent that the vines covering the temple are alive in a way that goes beyond normal vegetation.

It may be tempting to summarize THE RUINS by saying that it's about killer plants, but that would be undermining its strong points. The latter two thirds of the film play out like a very grim five-character stage play about survival, with large servings of death and desperation, without resorting to the fake scares that many horror films use as a crutch. The gore, while often quite nasty, is also necessary to the story, which takes on a heavy psychological component as the characters begin to fear for their lives.

Based on the terrifying best-seller by Scott Smith, "The Ruins" follows a group of friends who become entangled in a brutal struggle for survival after visiting a remote archaeological dig in the Mexican jungle where they discover something deadly living among the ruins. "The Ruins" stars Jonathan Tucker ("Texas Chainsaw Massacre", "The Black Donnellys"), Jena Malone ("Pride and Prejudice", "Donnie Darko"), Shawn Ashmore ("X-Men: The Last Stand"), Laura Ramsey ("She's the Man") and Joe Anderson ("Across the Universe").

Plants | Theatrical Release | Mexico | Based On A Novel