The Sisterhood of the Traveling Pants (Movie Money) PG 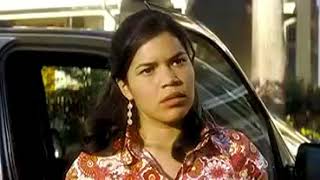 The Sisterhood of the Traveling Pants (2005) trailer

Ken Kwapis (HE SAID, SHE SAID) directs this coming-of-age film based on the novel of the same name by Ann Brashares. This tale of lifelong friendship uses a pair of magical jeans as a metaphor for the moral support and shared happiness which forms the glue between four teenage girls. The quartet purchase the pants while shopping together before going separate ways for summer vacation. Shy, self-conscious Lena (Alexis Bledel) takes the jeans to Greece where she is visiting her grandparents. They hardly seem lucky when she falls into the sea while wearing the pants and almost drowns, only to be rescued by a local fisherman. Before recognizing that the pants helped her find love, Lena sends them along to rebellious Tibby (Amber Tamblyn) with the hope that the jeans will prove luckier for her. Tibby has stayed home in Bethesda, Maryland for the summer to make a documentary film. With a nagging job at a superstore, Tibby finds humanity and sensitivity while the jeans are in her possession. Next the pants travel to Carmen (America Ferrera), a talented writer living with her father for the summer. The jeans make her face the anger she feels toward him for leaving her and her mother, and help her find forgiveness. Finally, the jeans end up at soccer camp in Mexico with Bridget (Blake Lively), a beautiful, athletic wild child dealing with the loss of her mother. Through the jeans, Bridget discovers that ignoring the truth doesn't make it disappear.

Like DIVINE SECRETS OF THE YA-YA SISTERHOOD, this moving film combines moments of comedy and with heartfelt empathy. The glowing cast of young women--Bledel, Tamblyn, Ferrera, and Lively--prove themselves in roles that show the growing pains of adolescence, while setting the stage for what are sure to be four very successful acting careers.

Divine Secrets of the Ya-Ya Sisterhood
$6.40
Add to Cart

The Sisterhood of the Traveling Pants 2 (Blu-ray)
$18.60 Super Savings
Add to Cart