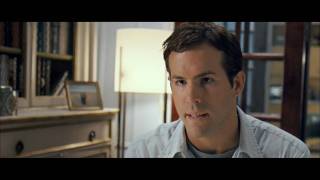 Ryan Reynolds and a bevy of excellent actresses star in this smart and touching romantic comedy about a little girl trying to understand her father's complicated history with women. Will Hayes (Reynolds) is in the midst of a divorce, and his 11-year-old daughter Maya (Abigail Breslin) wants to understand what went wrong with her parents' relationship. She begs her father to tell her the entire story of how he met her mother. Will begrudgingly agrees, but changes the names of everyone involved, leaving it up to Maya to decipher who in the story is her mother. Thus Will begins his tale, weaving a romantic and amusing maze of missed connections and bad timing with the likes of three beautiful women: Summer (Rachel Weisz), April (Isla Fisher), and Emily (Elizabeth Banks). Will bounces from relationship to relationship, misunderstandings and confusion thwarting him every step of the way. Who will he end up with' Which woman is ultimately right for him' The film keeps Maya and the viewer guessing right until the very end, with a bittersweet but ultimately triumphant surprise twist tying it all together.

Reynolds has long outgrown his VAN WILDER days, and does an excellent job of holding his own with the talented Fisher, Weisz, and Banks. The film is certainly a stand-out from the current crop of romantic comedies, in that the women are intelligent, well-drawn characters, and the relationships are painted with a funny, but realistic eye. And blessedly, it doesn't end with the standard blowout wedding that has become the hallmark of such films. DEFINITELY, MAYBE is a smart and sexy take on the complexities of love, and still manages to be kid friendly, while sending a very positive, honest message to children of divorce.

He's Just Not That Into You
$5.80 Super Savings
Add to Cart