From the Dark Side to Our Side. 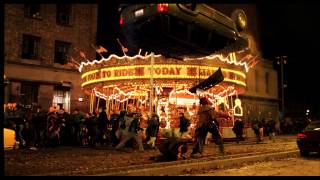 Based on the comic book series by Mike Mignola, Guillermo del Toro's gleefully eccentric film follows the supernatural adventures of Hellboy (Ron Perlman), a cigar-chomping, horn-filing demonic hero enlisted by an occult scholar (John Hurt) to fight evil in the Bureau of Paranormal Research and Defense. Along with the fire-throwing Liz Sherman (Selma Blair) and the amphibious psychic Abe Sapien (Doug Jones, with the voice of David Hyde Pierce), Hellboy is joined by new recruit John Myers (Rupert Evans), a squeaky-clean FBI agent assigned to keep the big red devil's exploits in check. Things get out of hand, however, when a vicious monster is unleashed by the villainous Rasputin (Karl Roden), leading to events that may set off an apocalyptic nightmare for humanity.

Echoing Peter Jackson's passion for THE LORD OF THE RINGS trilogy, HELLBOY is a labor of love from del Toro, a longtime fan of the comic and its creator. The director's enthusiasm shows, since HELLBOY is a wondrously strange slice of pulpy adventure, mixed with horror and humor, and enhanced by stunning visual effects. In the title role (and lots of red makeup), Perlman is pitch-perfect, giving the good-natured misfit a powerful--yet surprisingly sensitive--presence. Blair, Evans, Hurt, and other actors are similarly well cast, rounding out an ensemble intent on retaining the movie's dark yet superbly entertaining tone.

The League of Extraordinary Gentlemen
$5.80 Super Savings
Add to Cart