A mad killer is on the loose. / Contaminated by a deadly bacteria a scientist transforms into a hideous creature. 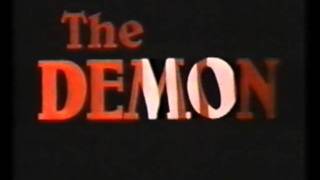 The Demon (1981): Under cover of darkness, a mysterious figure invades Mr. and Mrs. Parker's home and abducts their teenage daughter. When the police investigation stalls, an ex-Marine colonel with ESP joins the search. Meanwhile, the mystery man, his hands covered with claw fingered gloves, goes on a killing spree. With his ability to appear and disappear, this fiend may not be a man, but a force of supernatural evil. Starring Cameron Mitchell, Jennifer Holmes, Craig Gardner, Zoli Markey and Peter J. Elliot. Directed by Percival Rubens. CONTAINS NUDITY. -- Tom Weaver

Monster of Blood (1982):A lab accident at an English chemical company unleashes a virus which turns a scientist into a hideous monster. The slimy creature mangles and drinks the blood of his victims. Captain Kirk, a government agent, takes charge of the monster hunt, aided by the mutant scientist's assistant and the police chief. Kirk races against the clock when he learns that the government, anxious to prevent the spread of the contagion, has dispatched a jet fighter to wipe out the entire city! Starring David Warbeck, Miguel Herrera, Janet Agren, Roberto Ricci and Jose Lifante. Directed by Percival Rubens. -- Tom Weaver

25%off
Sleazy Slaughterhouse Double Feature: Bloodbath In... (DVD-R)
$5.95 on Sale
Add to Cart