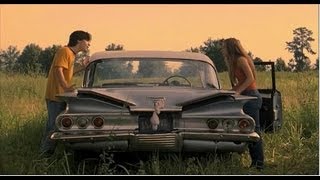 A brother and sister on spring break from college decide to take the scenic route home--an endless, desolate stretch of road through central Florida. Along the way they are run off the road by a strange truck, and later they see its driver disposing of what looks like a human body down a drainpipe near an old church. Derry (Justin Long) convinces his older sister, Trish (Gina Phillips), that they have to investigate, and despite all better judgement, they do. That's just the beginning of this wild horror film, directed by Victor Salva (POWDER). Salva keeps the audience guessing by never settling into any particular style or formula. The film veers gleefully in all directions, referencing such classics as NIGHT OF THE LIVING DEAD, NIGHTMARE ON ELM STREET, SILENCE OF THE LAMBS, and even THE TERMINATOR, along the body-strewn way. There is no shortage of clever humor amid the shocks, gross-outs, and nail-biting suspense, and Phillips and Long exhibit a refreshingly believable brother-sister rapport. The supporting cast includes Patricia Belcher as a psychic and Eileen Brennan as an eccentric cat owner. Francis Ford Coppola is the executive producer.