Much Ado About Nothing PG-13 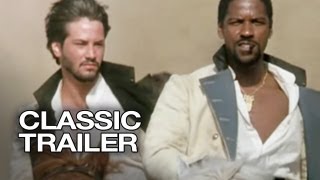 When gallant Don Pedro (Denzel Washington), his nefarious brother Don John (Keanu Reeves), and close confidantes Claudio (Robert Sean Leonard) and Benedick (Kenneth Branagh) ride thunderously into the Sicilian village of Messina, romance, gaiety, and suspicion abound. The men have returned safely from a war, and soon everyone in the sun-drenched villa is abuzz with thoughts of love. Claudio, enamored of the purity of the nubile Hero (Kate Beckinsale), entreats Don Pedro to woo the maiden on his behalf that evening at a masked ball. Once he's managed the successful betrothal of Hero to Claudio, Don Pedro has another plot in mind: he plans to trick Hero's bantering cousin Beatrice (Emma Thompson) and sworn bachelor Benedick into acknowledging they've fallen in love. Meanwhile, the villainous Don John, driven by contempt for his compatriots, has hatched a plot of his own: to fool Claudio and Don Pedro into believing Hero is unchaste. The plot works perfectly: sensitive but volatile Claudio denounces her publicly on their wedding day. All seems lost, and soon the attempts to set things right include a formal duel, a scheming friar, a mock memorial and a gaggle of bumbling constables. With its excellent cast and beautiful Tuscan backdrop, director Kenneth Branagh's film is a light-hearted adaptation of yet another of Shakespeare's great plays.

Full of "sparkling merriment" (The Hollywood Reporter), this sexy, sunny comedy positively sizzles as one set of lovers battles against a dirty trick, and another set simply battle seach other! Adapted by Oscar® nominee* Kenneth Branagh and featuring an all-star cast, this charming romp "casts the battle of the sexes in the form of an elegant dance" (The New York Times). A military war has just ended, but the "merry war" between Beatrice (Emma Thompson) and Benedick (Branagh) rages on! Can their friends trick them into making love instead' For that matter, can another couple's devotion survive the evil Don John's (Keanu Reeves) vicious lies' It's up to the blundering constable (Michael Keaton) to save the day so that the course of true love may yet run smooth!

Based on Shakespeare's comedy of 1598, this springtime tale is about two love affairs both assisted and complicated by the scheming of busybodies. One couple is coaxed together by gossip, and another is almost driven apart forever in this winsome and fresh adaptation shot on location in the lush hills of Tuscany.

Much Ado About Nothing
$12.80 Super Savings
Add to Cart

Much Ado About Nothing (Blu-ray)
$19
Add to Cart

From Here to Eternity (DVD)
$12.60 Super Savings
Add to Cart